Tales of the Cocktail- At Spirit Works Distillery, Grain-to-Glass is the Only Way 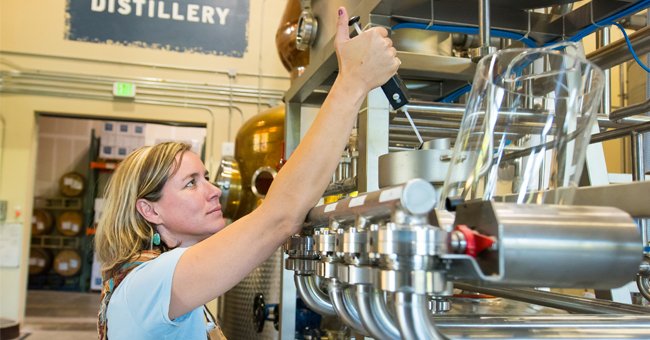 02 Sep Tales of the Cocktail- At Spirit Works Distillery, Grain-to-Glass is the Only Way

Posted at 07:00h in In the News by Proleadsoft 0 Comments
0 Likes
Share

On the day of my visit to Spirit Works Distillery in Sebastopol, California, the energy in the building is palpable. In just a few days, the very first barrels of whiskey, which have been aging for two years, will be ready for bottling—and the countdown is seriously on.

Timo Marshall, who owns the artisan micro-distillery with his wife and head distiller Ashby Marshall sniffs enthusiastically at some rye whiskey seeping out of one of the 180 barrels stacked high to the ceiling.

“Ah, you could spread that on toast,” Timo says with a beaming smile, patting the American White Oak barrel from Lebanon, Missouri in the same way you might imagine him petting his beloved dog Bandit. His fervor for grain-to-glass spirits runs through the entire operation. That, and a passion that he and Ashby share for transparency, all the more important in an industry laden with, what he calls, “smoke and mirrors.”

A few minutes later, in illustration of the same idea, Timo points out the large picture window between the distillery’s tasting room, where visitors can sample drams gin, sloe gin, vodka, and soon enough, rye and wheat whiskeys, while watching the pristine copper and metal still working away, converting organic California Hard Red Winter Wheat into a smooth, drinkable alcohol. Beyond the window is the mill where the wheat gets ground into a fine flour, before it’s mixed up in a mash tun with water and yeast. The sweet porridge-like smell of boiling mash permeates the building.
“We want to be as transparent as possible,” says Timo. “I will talk freely about the recipes. I’m not hiding anything and I’m very proud of the hard work we put into the spirits.”

And hard work it certainly is. Outsourcing the base alcohol, a simpler way to go about the distilling process, is outside of the question for the Marshalls. “It might make business sense to just buy alcohol to make your gin,” Timo says. “But I don’t understand where the craft is in producing spirits. Ours is a very real way of making spirits.”

The couple opened Spirit Works in 2013. They wanted to craft a sloe gin that was authentic, in the way that Marshall remembered from his childhood in Devon in rural southwest England. As a teenager he would forage for the feral, bitter, deep-blue berries in the hedgerows that lined public foot paths. The berries were used to make his family’s traditional sloe gin recipe, to be served as an aperitif after dinner. Years later, he and Ashby became inspired to take the sloe gin recipe to the next level, using it as the springboard for the launch of their micro-distillery.

“To make a good sloe gin, you need excellent gin,” says Marshall. “And we wanted to make the best gin, meaning we needed a good base.” Enter grain-to-glass.

At Spirit Works, the milling, mashing, fermenting, stripping out of the alcohol with the still, and finishing runs through a 21-plate batch rectification column are all done in-house, much of it by hand. Along with the locally sourced organic wheat that forms the base of their spirits, whenever possible, they source from non-GMO, organic, sustainable, and local suppliers. Though sometimes, as with the sloe berries that come from Bulgaria, it comes down to whatever will produce the best spirits at the end of the day. Tomorrow, assistant distiller Lauren will hand-zest fresh lemons and oranges for the gin recipe. To that, she’ll add juniper berries, coriander, cardamom, hibiscus, orris root and Angelica into the base alcohol, for a resulting sharp, clean, citrusy gin with an underlying taste and character of California wheat.

It’s a time-consuming and labor-intensive process, requiring more equipment, space and access to raw materials, but, Ashby says, as someone who loves to cook and make things from scratch, she can’t imagine doing it any other way.

“I love to have full control of the entire process from start to finish,” she says. “Grain-to-glass doesn’t necessarily make more economic sense, but the hands-on approach is important to us. We’re here testing the pH levels during fermentation, testing the brix of the mash, making the cuts during distillation – we are here for each step and we wouldn’t have it any other way.”

Unfortunately, Timo says, small California distillers have been hampered by restrictive Prohibition-era laws still on the books in California, including an archaic law that forbids direct consumer sales from the tasting room. “It doesn’t make sense,” says Timo. “People can go across the street and buy a bottle of wine from the winery tasting room, but they come here and can’t do the same thing.” Still, as president of the California Artisanal Distillers Guild, a key player in efforts to revise the law, he seems confident that positive changes are on the horizon.

The demand for the product is there. The response from visitors to the tasting rooms, and from customers in the states where Spirit Works is available — California, Colorado, Arizona, Oregon, and Illinois — has been overwhelmingly positive. In their homebase of Sebastopol, they’re benefiting from the thriving Go Local movement that values the local and sustainable.

See the story in Tales of the Cocktail here