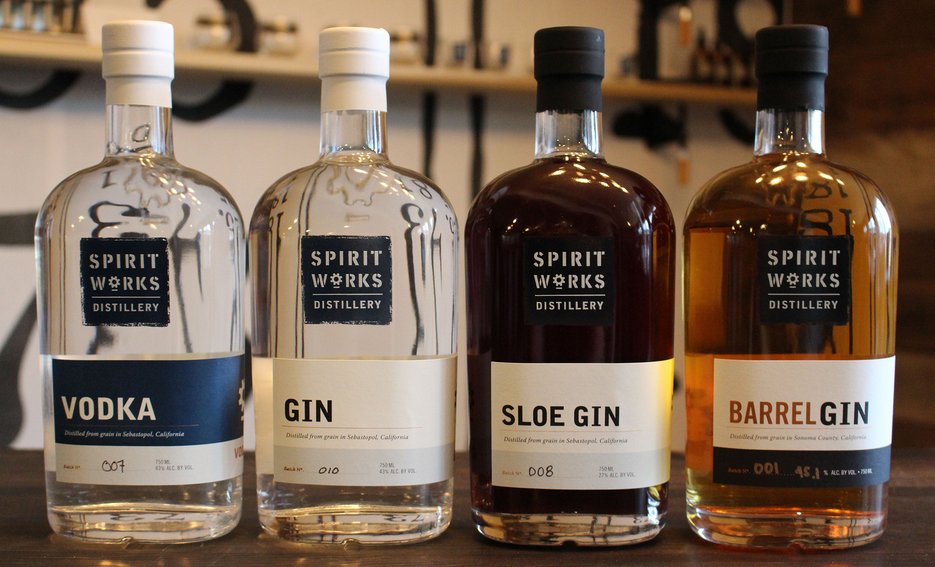 Posted at 17:24h in In the News by Proleadsoft 0 Comments
0 Likes
Share

Eating is an agricultural act, as Wendell Berry famously stated. But what about drinking? Living here in ag-rich Sonoma County, with vineyards across the street and orchards down the road, it’s easy to raise a glass of locally made wine, beer, cider, even kombucha.

Until recently, though, spirits didn’t enter into the equation. But a walk through Sebastopol’s Spirit Works Distillery proves that gin—and vodka and whiskey—can be just as much an agricultural product as any glass of Pinot.

Everything is made on-site in The Barlow complex, where old Gravenstein apple processing sheds have been revamped into a community of craft makers, artisans and local businesses.

Here, proximity builds collaboration: across the street, Woodfour Brewing Company finishes one of its draft beers in barrels used to age sloe gin. Nearby, the Soap Cauldron has created a customized Gin Botanical Soap scented with the same herbs, citrus, and spices used in Spirit Works’ gin, sold exclusively in Spirit Works’ tasting room. Zazu restaurant frequently features the company’s spirits in its specialty cocktails, like the Sloe 75, a rosy fizz of sparkling wine splashed with sloe gin.

This spirit of community extends beyond The Barlow. At least once a week, pig farmer Steve Conwell stops by to load his truck with jumbo-sized totes filled with steaming, spent whole grain mash. Once drained and cooled, the mash goes into the feeding troughs of his premium heritage pigs at Montgomery Ferguson Farms.

Every few weeks, an informal bottling crew of friends and community members old and new convenes at the distillery. There’s no automated bottling line here; instead, a call for paid helpers goes out to an email list a few days before each bottling. (Anyone who stops by the tasting room can sign up.) Gathered around a long metal table, the relaxed crew makes quick work of filling, sealing, and packing the six hundred bottles of a typical batch.

Visitors to the tasting room can watch the whole production process, from milling to mashing to fermenting and distilling, through a wide picture window overlooking the distillery’s steampunk-styled hybrid copper pot still and tall fermentation tanks. (Dog lovers should look out for Bandit, the Marshalls’ friendly Boston terrier, who patrols the distillery floor between naps.) And beginning in January 2016, tasting room visitors will also be able to purchase a bottle to bring home thanks to new legislation and successful lobbying by The California Artisanal Distiller’s Guild (Timo Marshall is the current guild president.) It’s all part of the company’s dedication to transparency and education, to transforming a mysterious product into something local made by people you can see and trust.

For more information on Spirit Works Distillery, go to www.spiritworksdistillery.com. The tasting room is located at 6790 McKinley St, Sebastopol. Open Thu-Sun, 11am-4pm, 21 years and over.

Stephanie Rosenbaum Klassen is the author of The Art of Vintage Cocktails as well as numerous other books on food and drink.

Read the article in the Sonoma County Gazette here