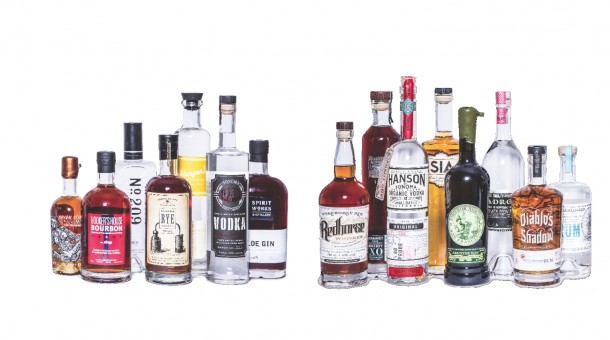 Posted at 16:01h in In the News by Proleadsoft 0 Comments
0 Likes
Share

6. Sebastopol is producing honest-to-goodness sloe gin.
In Timo Marshall’s native England, steeping wild sloe berries in alcohol is a centuries-old tradition. “When I first came to the U.S. and couldn’t find any, I was fairly distressed,” Marshall recalls. The red liqueur doesn’t have quite the audience here that it does in England; its fans, Marshall says, occupy “kind of the geek cocktail section of the world.” So in 2013, Marshall and his wife, Ashby, opened Spirit Works, the Sebastopol distillery where they produce “grain-to-glass” sloe gin, a concoction made by macerating sloe berries imported from Europe with alcohol made from California red winter wheat. In December, the distillery introduced a limited-edition barrel-aged version, the first of its kind in the United States. Most people have one of two reactions to sloe gin, Marshall says. “Either they drank it in high school and have terrible memories, or they’ve never heard of it. So everyone needs a small touch of reeducation.”

7. We are drowning in great locally-made alcohol.
Here’s fifteen of them: Workhorse Rye cofounder Rob Easter describes himself as a “gypsy distiller,” meaning that his Redhorse whiskey ($140) is made at host distilleries. Prohibition Spirits finishes its limited-release Chauvet XO brandy ($75) in freshly drained bourbon barrels, which makes it drink more like a whiskey. Nope, vodka isn’t just made from grains—Hanson of Sonoma makes its bottles ($35) from local organic grapes. Sia scotch ($49) founder Carin Luna-Ostaseski winningly describes herself as “a Hispanic woman living in San Francisco, making scotch.” Thanks to Raff Distillerie’s Emperor Norton ($70), absinthe made on Treasure Island is an actual reality. Last July, Santa Cruz got its only distillery when Venus Spirits began making small-batch booze like El Ladron Blanco ($42), a blue agave spirit. Livermore’s Sutherland Distilling was founded in 2013 by three friends who named their Diablo’s Shadow Navy Strength rum ($30) after the mountain where they love to camp. Most rums are made from molasses, but Alameda craft distilling pioneer St. George Spirits makes its California Agricole rum ($75) from California sugar cane. That naked lady on the front of Seven Stills’ Chocasmoke whiskey ($36)? It’s the work of street artist extraordinaire Zio Ziegler. Prohibition Spirits’ Hooker’s House bourbon ($45) is named after Joseph Hooker, a notorious Civil War general, drinker, and ladies’ man. Allegedly the only distillery in the world built over water, Distillery No. 209 makes its gin ($35) in the shadow of AT&T Park on Pier 50. Water from Lake Sonoma provides the terroir in Sonoma County Distilling Co.’s Sonoma rye whiskey ($59), which is aged in new, charred American oak barrels and finished in old wood. The reason that Hangar 1’s Buddha’s Hand Citron vodka ($35) tastes exactly like its namesake lumpy, long-fingered Asian fruit? Its creators distill the whole thing—seed, pit, oil, skin, and all—instead of using mere extract. Located in Windsor, Sonoma Brothers Distilling uses a blend of corn, wheat, and a specialty barley malt for its vodka ($30). The production of Spirit Works’ sloe gin ($40) is overseen by Ashby Marshall, one of the industry’s few female head distillers.