PUNCH- Bringing it Back Bar: What to do with Sloe Gin 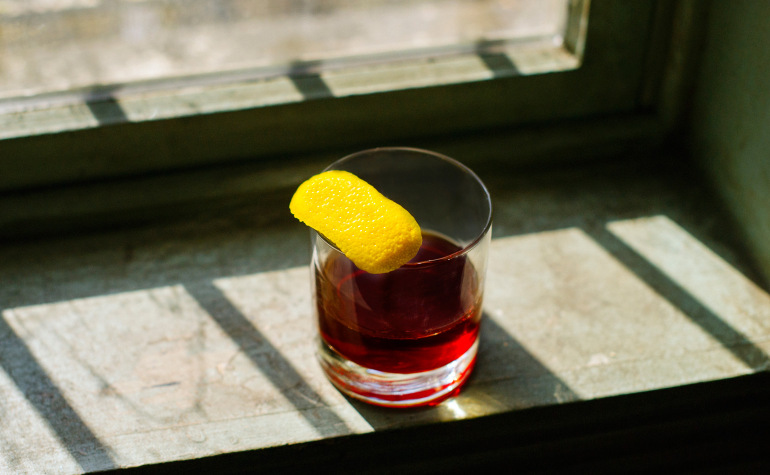 12 Aug PUNCH- Bringing it Back Bar: What to do with Sloe Gin

Posted at 16:08h in In the News by Proleadsoft 0 Comments
0 Likes
Share

Every bar sports marginal bottles that elude even the most seasoned drink-makers. That is, until someone dusts them off and uses them in a new way. In “Bringing It Back Bar,” we shine a light on overlooked bottles and devise recipes to take them from back bar to front shelf. First up: sloe gin.

Boredom and an unkempt back bar are two great engines of creativity in cocktails. It’s almost always during the slow shifts, the Tuesday and Sunday nights when time crawls to a halt, that bartenders resort to R&D—experimentation in the name of creating new menu drinks—to entertain themselves.

Managers insist on a well-organized back bar as a prerequisite for speedy service, allowing bartenders to whip around and put a hand where a particular spirit should be without pausing to think. But, then again, a slightly disordered backbar, like an overstuffed used bookstore, has the virtue of taking one’s gaze in unexpected directions, rewarding curious souls eager to seek out the unexpected treasure. It is those back bars of the back bars—the repositories of dusty bottles with peeling labels, strange imports from the far reaches of the globe, odd-colored liqueurs, unopened antiques from brands long since gone out of business—that can be the most fertile ground for cocktail innovation.

“That’s exactly how I came up with the Transatlantic Giant,” says Colin Shearn, a former bartender and manager at Philadelphia’s Franklin Mortgage and Investment Co. “I pulled Plymouth Sloe Gin off the shelf and wondered what to do with it besides make a Sloe Gin Fizz.”

He plucked two other anomalies—Marie Brizard crème de cacao and Cynar—as well, because why the hell not? Numerous failed attempts and a few drunk coworkers later, Shearn stumbled upon a formula that employed bourbon, rum and a few dashes of Angostura bitters to ease the drink’s viscosity and cut through the sugar. The cocktail ended up in an edition of Beta Cocktails, a cult compendium dedicated to unorthodox drinks.

It’s the same story behind many forward-looking drinks being concocted today: A bartender looking for a challenge meets a benched spirit whose potential has not yet been fully tapped. As it becomes increasingly trendy for liquor companies to resuscitate vintage products from the pages of their history books, and as bartenders exhaust the possibilities of the usual suspects, it’s these marginal bottles—pushed to the back and forgotten by time—that are becoming catalysts for a new generation of drink mixing. — Christopher Ross

The first question one might ask when encountering sloe gin is, unsurprisingly, “What is sloe?” The thing that lends this spirit its name is a small deep purple berry that grows wild on blackthorn trees throughout Western Europe. A miniature relative of the plum, sloes taste extremely tart (read: unpleasant) on their own—but, when left to infuse with a spirit like gin, that tartness pairs delightfully with the kick of alcohol and the sweetness of added sugars to result in something infinitely better than the sum of its parts.

References to sloe gin can be traced as far back to English poetry written in 1717, but the spirit became widely associated with one particular cocktail—the Sloe Gin Fizz—at the beginning of the 20th century. After a dark period during the latter part of the century—when American distillers began making mass-market sloe gin with artificial flavorings, and American drinkers began associating sloe with Alabama Slammers and hangovers—producers like Plymouth have revived the historic spirit by distilling it the old-fashioned way again.

Since then, sloe gin has been working its way back onto cocktail menus in manifestations other than the standby fizz, whether via bartenders who’ve stumbled upon it accidentally, as in Shearn’s boozy Transatlantic Giant, or others who bear a longtime love for the marginalized liquor. “It’s definitely a product that went down the dark rabbit hole of poorly-made liquors for a long time,” says Alex Bachman of Chicago’s Billy Sunday. But, “when made correctly, it’s a fantastic ingredient that has a long history in classic cocktails, and can add really dark blue fruit character and a brambly greenness.” Bachman incorporates it into a bergamot bitters-spiked riff on the traditional Blackthorn, made with either a California-produced sloe gin from Spirits Works or one the bar makes in-house.

Meanwhile, at Manhattan’s Dear Irving, Tom Richter bases his Post Modern on a spirited combination of sloe gin and Scotch, rinsed with absinthe, while his Running of the Bulls plays off the fruity flavors of sloe and genever with added citrus and curaçao. “Sloe gin has been around for a long time,” says Richter, “and is just itching to start being used as a more common modifier.”

See the story on PUNCH here