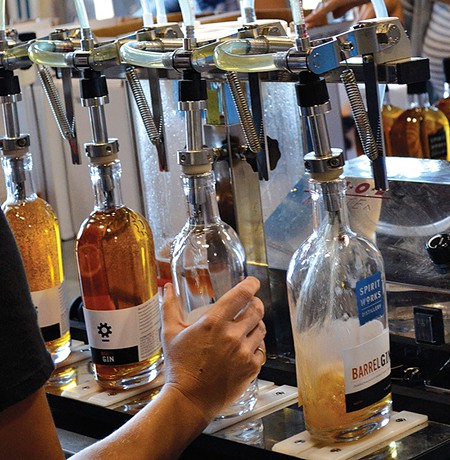 Posted at 18:07h in In the News by Proleadsoft 0 Comments
2 Likes
Share

Bandit knows the drill. When Timo and Ashby Marshall lead a tour of their Sebastopol distillery, their Boston terrier trots alongside, pausing for an explanation of the grain milling process with an expression of utter concentration, before dutifully moving on to the next feature in tandem with the shuffling shoes.

Perhaps Bandit thinks he’s working, too, since everyone works on the production room floor at SpiritWorks, from the tasting-room manager to, on this day, the visitors.

The occasion is the distillery’s inaugural release of barrel-aged gin. SpiritWorks opened in 2013 in a reconditioned warehouse in Sebastopol’s Barlow center. It’s a “grain to glass” distillery, meaning that the process is controlled every step of the way, from receiving pallets of California-grown, organic red winter wheat to rectifying the final product in a column still.

The first job of SpiritWorks is to produce gin, a spicy gin that’s fragrant with fresh-zested citrus, coriander and other herbs and spices that are displayed in jars on a table by the distillery sofa. “No vodka!” was their rallying cry, until they made the mistake of offering their grain-neutral spirit—only as an interesting contrast to the finished product—to a very large distributer with whom they’re thrilled to be associated, says Timo. “Great, we’ll take both,” said the very large distributer. So SpiritWorks makes both gin and vodka.

But it may have been sloe gin, all along, that was the goal, the way that Timo Marshall waxes over the bitter, Eurasian berry of the blackthorn bush. Reared partly in Peru, Marshall speaks, with an international British accent, about his family’s passion for the sloe berry. Now back in Britain, his mother carries a walking stick on country strolls, not for balance but to craftily hook branches laden with berries over stone walls. SpiritWorks sloe gin, quite a different product from the treacly sweet product that older visitors may recall—and younger ones have never heard of—is made with macerated Bulgarian berries.

In 2014, SpiritWorks added a rickhouse for aging wheat and rye whiskey in barrels. Several of these have iPods and headphones attached to them, each matched to a control barrel, in a “why-not” bid to see whether ballet has a different effect on the aging spirit than rock, for instance.

The whiskey will rock on into 2015 before being bottled. Meanwhile, SpiritWorks has just bottled its first batch of barrel-aged gin. Unlike American whiskey, which is required by law to be aged in new, charred American oak barrels—if even for a matter of minutes, for some white whiskeys—this style of gin was a rarity outside the Netherlands, but it’s catching on with craft distillers.

Amber-hued in a clear bottle, hand-numbered with sparkly pen for “extra bling,” according to Timo, Batch 001 Barrel Gin (expect to pay about $50) is a highly aromatic product with citrus zest, juniper and coriander overwhelming the typical alcohol aroma of clear spirits. From its four-month sojourn in oak, it also picked up caramelized wood notes and sweet vanillin, so it can be tried in place of either gin or whiskey, for different takes on the martini or Manhattan. And it’s also meant for sipping neat.

See the story in the North Bay Bohemian here