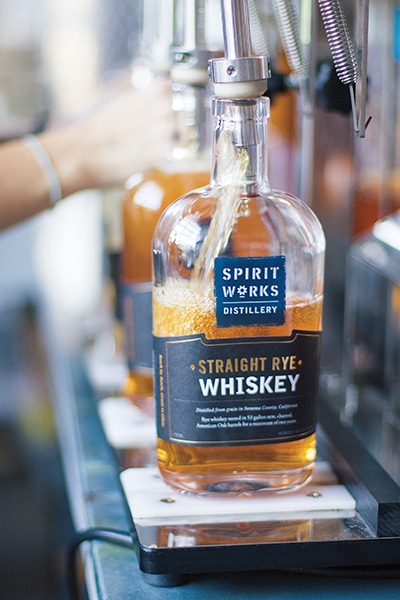 Posted at 11:48h in In the News by Proleadsoft 0 Comments
0 Likes
Share

Become an Employee for A Day at Spirit Works Distillery.

In a stretch of Sonoma County farm country that concerns itself mostly with crafting top-notch wines, Spirit Works Distillery stands out.

Located in The Barlow, a former apple-processing plant in Sebastopol, this artisanal microdistillery focuses on getting something different into your glass. Using mostly organic California red winter wheat from the Sacramento Valley, the distillery creates—batch by batch—an assortment of craft spirits, including vodka and sloe gin—emphasizing its “grain-to-glass” philosophy.

“We begin every product with whole grain and perform every step [in-house], all the way to hand bottling,” says Nichola Lucas, apprentice distiller and production associate at Spirit Works.

To make just one spirit, roughly 2,000 pounds of grain are milled, mashed, and mixed with approximately 500 gallons of water before being distilled. Everything is done by hand, one step at a time, under the watchful eye of head distiller and co-owner Ashby Marshall and her female spirits production team. Her husband and spirits partner, Timo Marshall, is the sole male involved in the boozy alchemy. Even the distillery’s dog, Bandit, is a female.

One ton of grain equals roughly 700, 750ml bottles of booze, and with a staff of just eight full-time employees, that’s a lot of hooch to bottle. So Lucas recruits fans from the Spirit Works bottling list who are interested in on-the-job training. (Anyone 21 and older can sign up online.) Bottling gigs take place whenever spirits are ready—often on Sundays, two to three times a month.

You’ll have to master a few machines, but many tasks are done by hand. Bottlers use droppers and wide-mouth beakers (flash back to high school science class) to correct a bottle that has too much or too little. Bottlings typically last a few hours, and come with a $10 per hour paycheck and a 10 percent discount, which is handy when adding to your home bar.

For those who don’t want to work the bottling line, the tasting room is open Wednesday through Sunday. An oversized floor-to-ceiling window provides great views of the production floor, and distillery tours are offered every weekend for an up close look at the process. Fortunately, you can still get your hands on a bottle. You just have to do it the old-fashioned way: Buy it. spiritworksdistillery.com.