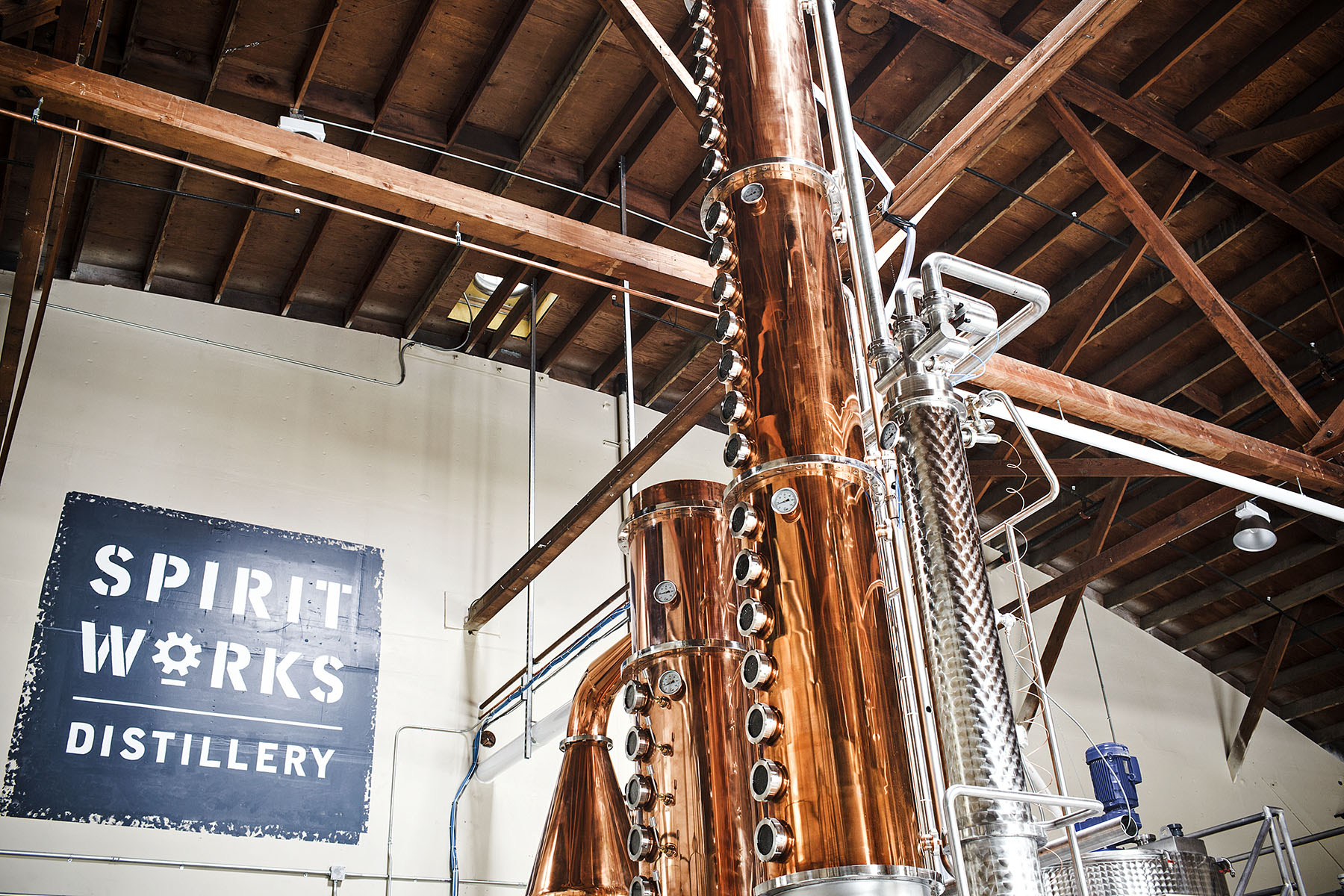 Posted at 14:43h in In the News by Proleadsoft 0 Comments
2 Likes
Share

Overlooked for decades, the vodka distillery tour is becoming a sought-after experience.

There’s no denying vodka’s versatility. Pouring it from an icy bottle renders a creamy mouth-feel with an almost syrupy viscosity; splashing it over a glass of shimmering ice cubes allows its pure, clean notes to shine. With the ability to be combined with any number of flavor enhancers to create a variety of cocktail guises, it’s no surprise that vodka is the top-selling spirit in the U.S.

But the libation hasn’t always held a prominent position in well-stocked bars. While its Russian— though some say Polish—origins are said to date back to the ninth century, America’s clear spirit of choice has historically been gin. Cocktail historian David Wondrich notes in his book “Imbibe!” that it was not until the late 19th century that “such exotica as Russian vodka began popping up in the occasional mixture.”

A 20th century marketing ploy by entrepreneurs Jack Morgan and John G. Martin was the impetus for the 1940s to became the commonly agreed upon decade that the U.S. discovered vodka. At that time, Martin had acquired Smirnoff and wanted to popularize his new spirit, while Morgan owned a Hollywood restaurant that needed to increase sales of its ginger beer. Using copper mugs and a bit of lime, the pair concocted a collaboration that continues to live on: Today, the Moscow mule boasts enduring appeal as a refreshing vodka cocktail.

Fast-forward to the present, and myriad vodka distilleries exist worldwide. In addition to Russia and Poland, as well as hundreds of brands produced domestically, this type of liquor is produced in Japan, Italy, Switzerland and New Zealand, among others. And as the fascination with its origins and the allure of the cocktail industry continue to grow, tours of these distilleries have become just as popular as the spirit itself.

Head to the Netherlands for a behind-the-scenes look at one of the most iconic brands in the world: Ketel One Vodka. Though the brand was founded in 1983, the distillation expertise of its producer—the Nolet family—dates back more than three centuries. In 1691, Joannes Nolet opened The Nolet Family Distillery’s doors in Schiedam, a fishing village also known for its canals and windmills, and it has continued to produce premium spirits for more than three centuries. This year, the family distillery celebrates its 325th anniversary and has released a limited edition Ketel One bottle to commemorate the occasion. “It is our dedication to that heritage that comes alive today in every bottle of Ketel One Vodka,” says Carl Nolet Jr., who represents the 11th generation of Nolet family distillers.

Tours begin in De Nolet, a 141-foot windmill modeled after traditional Dutch versions that houses a welcome center, exhibit and theater screening “Generations,” a film documenting the history of the Nolet family business; the structure is also a working windmill that supplies green electric power to the distillery. Visitors can view displays of family memorabilia while learning how Ketel One launched: After a trip to the U.S., Carolus Nolet Sr. Was inspired to create a quality vodka specifically for the American market— one that he believed would be the ultimate spirit for martinis, drinking on the rocks and sipping neat. This was accomplished by using premium European wheat and integrating a redistillation step, resulting in its silky smooth signature characteristics. “The fresh and lively ultra-wheat spirit is married with the rich and full-bodied master pot still batch, delivering the genuine crisp and sophisticated taste of Ketel One Vodka,” Carl says.

Continue on the tour, and you’ll learn that Ketel One is named after the distillery’s oldest coal-fired pot still, Distilleerketel No. 1, which is still in use and pictured on every label. You can also walk through the bottling line and fully automated warehouse before finishing with an opportunity to taste the vodka, and perhaps linger at the top-floor distillery bar.

For a domestic experience, Spirit Works Distillery was founded by Timo and Ashby Marshall in 2012 with a commitment to a “grain-to-glass” philosophy wherein the distilling process is closely monitored and locally-sourced grain is milled, mashed, fermented and distilled on site. The Sonoma County distillery also boasts one of the only all-female production teams in the U.S., led by Ashby and distiller/production manager Lauren Patz. While the impetus for its inception was sloe gin (a berry-infused gin made to the specifications of a family recipe passed down to United Kingdom-born Timo), the libation starts with the base of a neutral spirit—or vodka—and enthusiastic requests during early distillery visits resulted in its addition to Spirit Works’ product line.

“While it was not our original plan to sell this product, we thought it was important for visitors in our tasting room to be able to sample our vodka in order to see the progression of the spirit during production,” Patz explains. “We wanted people to be able to experience the base of the gin to understand and appreciate how the different botanicals were influencing the flavor, but also understand what the base was contributing. During visitor tastings, it turned out that people were really enjoying the vodka as a stand-alone product.”

Now, Spirit Works is one of the few distilleries that produces its own neutral spirit. Made with organic, California-grown Hard Red Winter wheat that imparts distinct warmth and earthy nuances, the vodka is unique for its category, which is, by definition, colorless and odorless. Spirit Works’ iteration “has slightly sweet vanilla notes with a rich mouthfeel and smooth finish,” Patz says. “It warms as it goes down instead of the burn so often experienced on the tongue. It is delicious both sipped by itself and mixed in a cocktail.”

Tours of the distillery invite visitors to follow the detailed path from grain to finished product, as guests are guided to the mill for a thorough education on the various steps of production including milling, mashing, fermentation and distillation. A visit to the tasting room concludes the tour with sips of Spirit Works’ growing roster of spirits: vodka, gin, sloe gin, barrel gin, and newly released straight wheat and straight rye whiskeys.

“We are extremely proud of our grain-to-glass ethos and we love sharing our passion with visitors,” Patz says. “Our entire philosophy is very much based on transparency. We want people to come in and see who is making the product and how it is being made.”

A number of boutique distilleries also exist across the U.S., and provide an in-depth look at the ways in which different ingredients can shape a spirit profile. Vodka can be made with wheat, rye, corn, mixed grain, even grapes or rice, and flavor nuances can range from rowdy and bold to floral and herbal. At Seattle’s Glass Distillery, for example, vodka is made using sauvignon blanc and chardonnay grapes from Washington state’s wine regions; with an appointment, visitors can pull up a chair in the tasting room to enjoy sips amid glass art by local artists, which inspired the brand’s namesake. Starting in April, founder Ian MacNeil says he will be implementing public tours. Farther south, Woody Creek Distillers of Colorado uses potatoes grown and harvested locally to make its award-winning vodka. Visitors to the distillery are greeted by gleaming 34-foot custom Carl stills and can end tours with seasonal cocktail creations in the tasting room lounge.

Different methods of distillation and filtration can also contribute to vodka’s diversity, along with geography and climate. Tropical tastes can be had at Hawaii Sea Spirits Organic Farm & Distillery on Maui, where Ocean organic vodka is distilled from organic sugar cane and blended with ocean mineral water; daily tours start every half-hour and include samplings in a souvenir shot glass that visitors can take home. Or, head to Louisiana to sample Donner-Peltier Distillers’ Oryza vodka, which is made from locally-grown rice and water purified through four different methods. A steam-driven, copper Kothe vodka still is used in a distillation process that is repeated 17 times.

With these glimpses into vodka’s historical origins and modern day methods, it’s little wonder distillery tours have such a draw. Whether your drink of choice is a spicy bloody mary, shaken or stirred martini, or an unembellished glass of the clear liquor, you’re enjoying the history and heritage that is vodka with every pour.

Read the article in the Montage Magazine Spring 2016 issue here