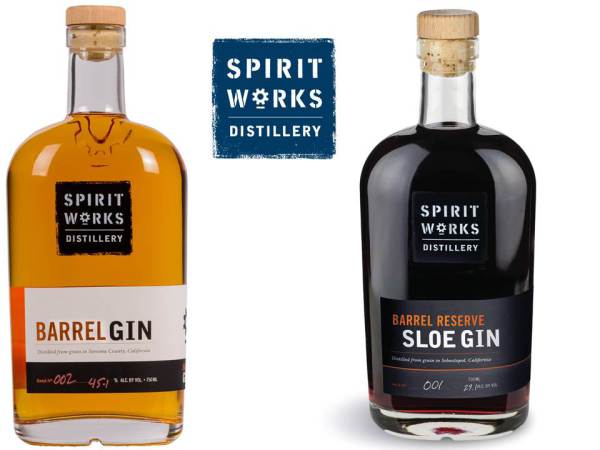 Posted at 13:54h in In the News by Proleadsoft 0 Comments
0 Likes
Share

I recently posted a fawning article elsewhere on the Spirit Works Distillery in Sebastopol, Sonoma County.  It was fawning because they truly are making some exceptionally good artisanal spirits there. Timo and Ashby Marshall are laser-focused on quality and it looks like they’re doing everything the right way.

I’d like to single out two of their spirits in particular that are outstanding examples of creative entrepreneurship: Barrel Gin and Barrel Reserve Sloe Gin.

Spirit Works Distillery Barrel Gin is an exemplar of the brilliance of simplicity. Put dry gin in a new American oak barrel for just the right amount of time and something magical happens.  We’re not talking about barrel maturation, as in whiskey; it’s more akin to a tequila reposado, where the combination of oak and oxygen round off any rough edges, buff out any harshness, and enrichen the flavors while mellowing the texture. The soft yellow-amber glow of the Barrel Gin echoes to the eye what the nose and taste proclaim: this spirit has been transformed. The barrel enhances the gin rather than dominating it.

Timo Marshall captains the barrel program, and he has an exquisite sense of timing, for the Barrel Gin is rich and plush in the mouth, without losing any of its natural botanical spectrum; it’s actually the reverse, for the Barrel Gin has gained, filled out, expanded in every direction.

Spirit Works Barrel Reserve Sloe Gin is another exceptional spirit, a traditional style of Devon sloe gin from England—gin macerated in sliced sloe berries, tangy, fruity, meaty and delicious. But when that Sloe Gin is placed in barrels, again, transformation occurs and profound things happen. The liqueur is concentrated, reduced, intensified, and the addition of light caramel and sensuous butterscotch and vanilla-oak-spice combine in absolute perfection.

Mind you, the Spirit Works Distillery Sloe Gin is itself a revelation, as different from the mass-volume travesties of corporate vulgarity of sugared and chemically flavored neutral spirits can be. Even after a lifetime aversion to cheap ‘sloe gin’, the original and traditional version from Spirit Works was tasty beyond belief.

And just when it seemed to be ‘as good as it gets’…it got better with the Barrel Reserve.  It may be science, with complex chemistry and physical forces at work. But it tastes like magic.

You may be frustrated with the Barrel Reserve Sloe Gin—it is extremely ‘small batch’, so there is very little of it; it’s available only in northern California and the Sebastopol distillery tasting room; and it is noticeably expensive at a $75 SRP. But that’s what quality, scarcity, science and magic add up to; so get some if you can.