Edible Marin and Wine Country – Nothing Sloe About It 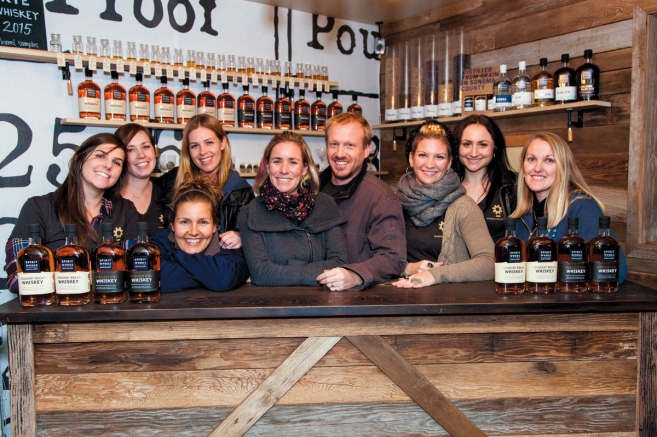 19 Feb Edible Marin and Wine Country – Nothing Sloe About It

Posted at 12:59h in In the News by Proleadsoft 0 Comments
0 Likes
Share

My first impression as I enter the Spirit Works Distillery warehouse in Sebastopol’s The Barlow complex is of industry—that particular combination of busyness and intriguing shiny machinery that makes, for instance, Willy Wonka’s chocolate factory so wildly productive. But unlike Willy Wonka’s outfit, Spirit Works is populated, every which way, by … women.

Nikki Lucas, production associate, cruises by on a forklift. Lauren Patz, distiller and production manager, is arranging something in the corner. Jessica Schumaker, marketing manager, emerges from the tasting room to greet me, and Ashby Marshall, co-founder and head distiller, stops by on her day off to check in. I am told there are several other female employees on the payroll.

How did this abundance of the feminine come to be in the traditionally male-dominated trade of distilling spirits? “Honestly, I ask myself the same question every day: How did this happen?” says Timo Marshall, co-founder with his wife, Ashby, of Spirit Works. “The thing is, we’ve picked this team for skills and abilities and this is how it worked out. Everyone here shares the ability to jump into the deep end and do whatever needs to be done.”

Marshall then adds with a smile that he “kind of just gets managed and moved around” by this dynamic group of women.

Distiller Lauren Patz, whose head shot on the Spirit Works website shows her almost jumping out of the frame, exudes this type of can-do dynamism. When I ask how the team services the extraordinarily large and shiny imported German still with all its tubes and nozzles and gauges, she gets a gleam in her eye and says, “With cleaning, comes knowledge.”

Initially a production assistant at Spirit Works, Patz says she was asked to do a little of anything and everything, including taking apart, cleaning and reassembling the parts of this oversized piece of functional art. “We do a full maintenance on it one time a year, but when things break down, Timo, who put the entire still together himself, or I often know what to try.”

Patz worked in the tasting room at TCHO Chocolatier in San Francisco, became interested in chocolate and spirits pairings and then followed her palate into this new career.

“When I was researching chocolate pairings I learned the correct way to appreciate whiskey,” she says. “When the heat melts away, there’s a world of flavor.”

She became a whiskey fanatic, further researched the distilling process, took the job at Spirit Works and never looked back. Patz says she appreciates the surprising creativity she finds in the refinement of age-old recipes.

Timo Marshall’s family hails from a village in Southwest Devon, England, and has been making sloe gin for generations. Before starting Spirit Works, Timo and Ashby spent time back home and practiced Timo’s family recipe with the sloe (blackthorn) berries that grow on hedgerows across the countryside. The berries, Prunus spinosa, look like oversized blueberries but are a relative of the plum. They are extremely bitter and can be difficult to collect to due to their thorny growing environment, but once procured and distilled they make a favorite homegrown British warming spirit.

Returning to the states confident in their ability to make a delicious sloe gin, the Marshalls realized that they could import sloes (from Bulgaria, it turns out) and become the only domestic producer of sloe gin in the U.S.

It wasn’t long before they tried their hand distilling traditional gin and it became obvious that Ashby, who Timo says has always been great cook, had what it would take to become a head distiller. “She has that sense,” says Timo. “It’s a skill, a refined sense of smell and a refined sense of taste. She can just put her finger on exactly what change is needed or what is missing.”

Spirit Works gin is made with juniper berries and assorted botanicals, which Spirit Works sources from SF Spice Co. The four categories of flavor necessary to make a balanced gin are spice, grass/earthy, floral and citrus. To this end, in addition to juniper, Spirit Works uses coriander, cardamom, orris root, angelica and hibiscus, as well as lemon and orange rind. At the outset of the venture, Ashby’s sensitive palate detected a hint of bitterness she was not happy with, and she was certain it came from pith on the rind they were sourcing. That was when the Spirit Works crew began ordering fresh citrus and hand zesting to make sure that zero pith entered the spirits.

“It is painstaking work,” says Timo, “but it was the only solution.”

The beauty of craft distilling is that while the process is informed by eons of tradition and the empirical results of predecessors’ work, the business has the flexibility to try new things. Spirit Works started with the traditional and sloe gins, then experimented with a barrelaged gin (Barrel Gin), which turned out beautifully. In fact, Wine Enthusiast just gave it 94 points—balancing the fresh notes of botanicals with the Old World flavors of the barrel. The color, like other barrel-aged products, is a glowing liquid amber.

Next they ventured further into unchartered territory, creating a barrel-aged sloe gin (Barrel Reserve Sloe Gin). The American White Oak barrel “rounds the tart flavor of the sloes,” creating a layered velvety drink, one of the warmest and richest liqueurs I’ve tasted.

As a whiskey fan, distiller Patz is especially excited about the latest Spirit Works offering. In November 2015, after two years of aging in charred American White Oak barrels, the company released its first batches of Straight Wheat Whiskey and Straight Rye Whiskey. “With gin you are playing with the flavors of the botanicals,” Patz explains. “With whiskey, you are expressing the flavor of the grains, and working to preserve the integrity of what you started with.”

The Spirit Works base spirit is made with an organic hard red winter wheat sourced from the Sacramento area, and the notes are described by Patz as soft and sweet with caramel, vanilla and butterscotch flavors. The Straight Wheat Whiskey is 100% hard red winter wheat, while the Straight Rye Whiskey contains 70% rye, and 30% malted rye and malted barley sourced from Scotland. “The malted grain gives the whiskey a softer, rounder, very enjoyable finish,” Patz says.

I follow Timo and Marketing Director Jessica Shumaker to the barrel room as Timo notes that his wife has designed the whiskeys to age for exactly two years, and that she is exacting about excluding the “heads and tails.” He further explains that the distillate that comes out of the Willy Wonka—esque still is made up of “heads,” “hearts” and “tails.” The heads and tails vary in alcoholic concentration and contain undesirable elements that can overpower the flavor of the final spirit (and cause a mighty hangover), so the magic touch of distilling is to know where to make the cuts and include only the hearts.

“We want to do everything right,” Timo explains. “Right down to deciding to adhere our labels by hand because we wanted a very specific shape for our bottle, a flask shape that is a just little smaller and better for our female distillers’ hands to hold.”

This labor intensive production, never taking the easy route, may have seemed counterintuitive at first—perhaps not the most direct approach to profitability—but in fact, as consumers have become increasingly aware and choosy, the fine-tuned and hand-crafted approach matters.

“In the tasting room people are asking us about all of the details,” he continues. “They want to know about the grain, the size of the barrel, exactly how long something aged. We’ve always done things this way and now it is paying off.”

The creative atmosphere seems to make for a lot of fun as well. I notice a whole section of barrels set up with personal iPods and earbuds (barrel buds?) adhered to their sides. “Yeah, well …” Timo begins to explain, cracking another smile. “There are a lot of reasons why liquid will go through the wood of a barrel. Vibration is one, so this is the way we vibrate the liquid.” Each employee chooses a playlist for a given barrel. Timo’s is the rollicking bluegrass hybrid band The Devil Makes Three. Ashby, going highbrow, set hers up with The Nutcracker by the SF Philharmonic. Lauren has her barrel taking in the more exotic Santigold. Other barrels are rocking to Led Zeppelin and the soundtrack from Tron.

“We take it pretty seriously because the barrel has to listen to this same music for 20 months. We’ll see how they turn out.”

And, as of January 1 of this year, it has become easier for those of us interested in enjoying Spirit Work’s creations to get our hands on these distinct bottles. Thanks to the behind the scenes work by the California Artisanal Distiller’s Guild, of which Timo is currently president, brand new California legislation allows craft distillers selling less than 100,000 gallons per fiscal year to sell up to three bottles per person out of their tasting rooms and at special distillery events.

“This historic legislation changes Prohibition-era laws for craft distillers to reflect the modern marketplace. Assembly Bill No. 1295 allows craft distillers to operate in a similar manner as wineries and breweries under existing law,” notes Assembly Member Marc B. Levine (D-San Rafael), the sponsor of the bill.

According to Timo, this bill has the potential to increase the revenue of small-production facilities by 50%. “This lets us test our market with new products in the tasting room,” says Timo. “And that means we can be even more creative.”

Can’t wait to see what they cook up next.