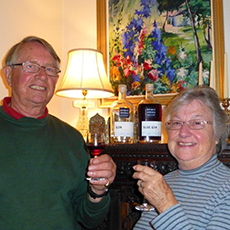 The maceration process on this batch went better than expected and was very efficient in its yield. We actually put this batch out in the sun for a couple of days to keep it a little warmer than usual, and that might have done the trick.

It was during this batch that the state bill AB-933 was signed by the governor. This bill allows certain distilleries to start selling “tastings” from their tasting rooms. It won’t affect us dramatically – it’s still illegal for us to sell a bottle of our product directly to the consumer – but it is a step in the right direction.

We also heard back from Timo’s folks in the UK on their verdict of Spirit Works Distillery Sloe Gin. They approved, but since the word has got out, they are having a little difficulty hiding the bottle from the rest of the village!